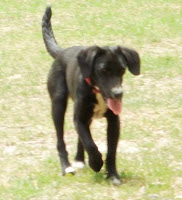 We learn from our parents, our teachers, our colleagues, our friends, and even our children. But if we are really aware, we can also learn magnificent lessons from non-human friends too! I learned a lesson on conflict resolution recently from our youngest dog, Sally Brock-Page. Sally is a cute black puppy we got from the pound last fall. And Sally is a very important dog for lots of reasons. For one thing, Sally represents the commitment that has grown between me and my partner of eight years. When Greg came into my life, I already had an old dog named Welcome. And Welcome is still with us. We normally think of Welcome as the PAGE dog. Greg’s children really wanted a puppy so we adopted one from the pound and named her Windy. Because our relationship was fairly new, and I was still a bit skeptical about whether or not anyone could live with me very long, I suggested that we have the understanding that Windy would be the BROCK dog. However, in 2007, we took the big leap of giving our love its fullest expression through marriage. This past fall when we got a new puppy, we decided that she would be the BROCK-PAGE dog. And Sally Brock-Page has grown in size and spirit. She is a healthy, happy, dog – a little on the frisky side, but we attribute that to her youth! In any case, Sally is the dog that taught me a lesson recently.

In the mornings, I usually walk across the pond dam and use the looping road on the other side as my jogging track. (Four times around is approximately one mile.) Occasionally one or more of the dogs will go with me. There is one house in the neighborhood on the looping road that has an old dog that will bark loudly to let us know that we are unwelcome. If any of our dogs are with me, I call them to me to make sure they do not go near that dog’s yard. I’m not afraid for our dogs. I do believe they could easily take the other dog in a fight with no problem. This dog is one of those very short legged dogs, and he moves pretty slowly. I just don’t want any of them to get hurt. So what’s Sally’s lesson?

The other morning Sally was with me. When we came around the first time, I called her and she stayed by me when we went by Short Dog’s yard. But as we neared the yard on the second loop, Sally bounded into it! “OH NO!” I shouted. “Come, Sally, Come.” She paid me no attention but ran right up to Short Dog. Then she got down on her belly, as LOW as she could go to get lower than Short Dog. And she stayed very still and let Short Dog sniff her all around. Then Sally just jumped back up and ran back to join me on the road. After that, Short Dog did not bark at us. On the third round Sally left and went back across the pond dam while I finished my jog. I expected Short Dog to begin barking at me when Sally was not at my side, but he let me by without a yelp. Sally had been my emissary – but now I was accepted as well.

I pondered that interaction and put some words to Sally’s action. She was saying to Short Dog, “We know this is your domain. We humble ourselves to show you that we come in peace and mean you no harm.” And I thought about the criticism that President Obama received just by providing the slight culturally appropriate bow to leaders of other countries when visiting them. Maybe we should do more bowing, not less. And perhaps we could easily solve many conflicts in our families, at work, and in other relationships by being willing to show a little more humbleness. It’s good to STAND UP for what you believe in and fight for what’s right. But sometimes, maybe all we need to do to stop those yelping dogs is to let them know that we recognize their right to exist and be happy, and that we mean them no harm. Here's to life, liberty and the pursuit of happiness; for Short Dog, Sally, and the rest of us!
Posted by revjanepage at 6:37 PM 1 comment: