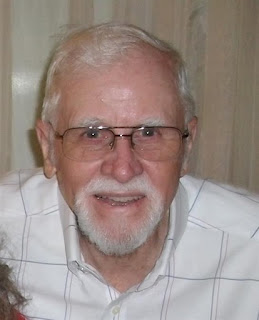 There are those individuals in this world, who we must grow to appreciate and like --- and then there are those few who we take a liking to – right off the bat.  How could I not love Jerry Hegstrom from the moment I met him – and that love continued.  For he made me feel so special every time I walked into this building.  He would greet me with smiling eyes and a welcome embrace.  Of course, as I observed I realized that I wasn’t all that special – Jerry seemed to be greeting everyone with joy and thanksgiving and amazing grace.  And although Jerry is not with us anymore – he’s left so much good energy and love in this building that it kindles our lights and we pass it on to others.

I’ve been asked by the family to share a Eulogy with you.  I had hoped that our pastor emeritus might be able to do it because he knew and loved and appreciated Jerry for more years than me.  But Bill has been in the process of getting some tests and his heart valves all cleaned out.  And he’s going to be getting a valve replacement.  He’s doing much better but not ready for prime time yet.  Therefore, the honor of sharing this eulogy falls to me – and it is indeed an honor.

I’ve gathered information from family members and others in my effort to share a bit about his life, but as many of you know, it’s difficult to summarize a life in just the time one allows for a eulogy.  So, I’ve decided to share three main characteristics about Jerry and some supporting examples of each.  The three characteristics are family man, hard worker, and a gentleman.

First – Jerry Hegstrom was a family man.  He was born in North Dakato on March 3, 1931, the first born of five children.  Although his name was Gerard, most folks call him Jerry. His sisters and brothers are all J's as well. Judy, Joy, Jack and Jim. Tamara reports that this J thing – was always fun at family gatherings. Especially when Jerry married a June and there was another Jack. :) Since his brothers and sisters came along later, he was always the leader, and when Jerry’s father was killed on the job when Jerry was only 18, he truly took on that leadership role for his siblings.  He loved his family more than anything and stayed close with his siblings even though they were miles away.

Yes - Family was so important to him. And having June as his Queen made him feel like a king. He adored her.  June’s sister wrote on the tribute wall on Memorial Park’s web page:
“My sister fell in love with your father. He swept her off her feet. He gave her 2 beautiful children, whom they have loved and treasured and cherished. Their love story is not only romantic, but a story we can all learn from. Enjoy life, enjoy your mate and family, try to make a difference with your own footprints in the Sands of time.”

Indeed, Jerry was a wonderful son, brother, husband, father, and grandfather.  The reason we were so fortunate to have them in Brunswick was because they wanted to be near their granddaughter Pearl. And Pearl, we are very grateful that you – along with your parents – provided that magnet to draw Jerry and June here.

2nd – Jerry was a hard worker! Tamara shared that he was driven, some might say a workaholic. He served in the Army and went to college on the GI Bill. He became an attorney and an FBI agent. He practiced law, and was VERY involved in politics. He served as an alderman, ran for Mayor and was a leader for the Democratic Party. He got a job working as a project manager on the new Minnesota Zoo and then became the director. This fit his passion for the environment.

The family moved to Atlanta when Jerry became the head of the Atlanta Zoo in 1980. Things kind of took a downward turn, but he never let that stop him. Jerry was resilient.  He rolled with the punches, and tried his hand at business – a high rise waterproofing/painting business, and June worked with him. When the bottom fell out of the construction business, he went back and passed the Georgia bar to practice law on his own with his son as his paralegal. When June decided to run for House of Representatives, he served as her partner, advisor, and campaign manager. And, of course, she won and represented their district well with his support for many years. All this time, he maintained leadership roles in his community. He served on the Leadership Atlanta Board. He was a member of the Leadership of the democratic party and the list goes on. And lucky for us, he started attending the UU congregation in Atlanta, and was very involved with activities there as well. I say that was lucky for us, because when they came to Glynn County, we at UUCG were the recipients of all that good work ethic and expertise, especially when our congregation was considering whether or not to build.  Jerry led the committee that worked with the architects and provided his legal expertise.  In Brunswick he also worked for the County Attorney's office until leaving to work as an independent attorney. He worked for many years and helped lots of folks in this community and in our congregation.

3rd – Jerry was a Gentleman – and a Gentle Man. June shared with me that one of her friends said that he was the “best man in the U.S.” and that another said that “he was the MOST Southern Gentleman of anyone she’d ever met who was actually a Northerner.”  He lived a life of honor, compassion, and chivalry.  He was a joy to be around. And he had a good sense of humor. Although, Tamara said he made the world’s worst puns and thought he was hilarious. He always greeted people eagerly and warmly and did so most Sundays at here at UUCG up until the last difficult years. He touched many of our lives and asked for nothing in return.
I want to close this eulogy by reading a wonderful resolution that June prepared for the Georgia House of Representatives to honor Jerry’s 65th birthday. 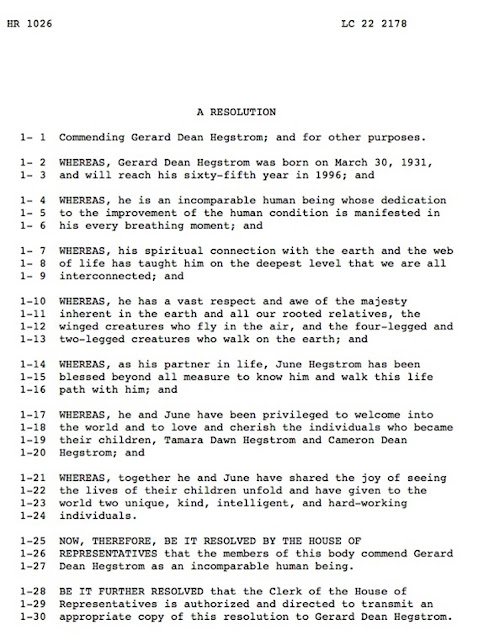 Gerald (Jerry) Hegstrom was indeed, a family man, a hard worker, and a gentleman.  Like most of us, of course, he had his trials in life.  And he moved through them with Amazing Grace. A gentleman of Amazing Grace.  And in honor of his wonderful life and love, I invite you to join in singing that old hymn – Amazing Grace #205 in your hymnal. Please rise in body or spirit as we sing.