Sustaining the Biodiversity of our Blue Boat Home 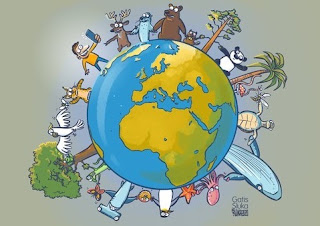 On May 5, I was privileged to do something I had never done before in my 70 plus years on this beautiful planet.  I went on a birding expedition. Greg and I were among other UUs who had purchased this opportunity in a fundraising campaign before the pandemic close-down in Spring of 2020. Of course, the event had to be postponed.  And actually, I’d forgotten all about it  But, of course, Sally Revoile, an avid birder herself and the church member offering the experience, had not.  So she rescheduled after we all were vaccinated and felt safe to get outside together for a shorebird watching experience.   Sally had arranged for Dr. Abby Sterling, a shorebird biologist to share information with us as we walked along the shore with our binoculars, pointing out sightings of not only birds – but other creatures as well.  I even found out that I could save a life that day – and I did – of a horseshoe crab that was beached on her back – but still living.  Abby showed us how we could gently pick them up and put them back in the water.  If I had known that this experience was to be sermon fodder, I would have taken notes.  But then everything that may happen in a minister’s life is sermon fodder – so be aware when you invite me to something – you may hear about it from the pulpit.

Because I did not take notes and am unfamiliar with the various species, I asked Sally to share with me what species she experienced that morning.  Here is her list:

That little piece of beach had lots of diversity that morning.

And, though I didn’t take notes, I do have something called the internet that I could use to go to the Manumet foundation’s site – that Abby told us about – and remind myself of things she shared with us.

Our section of the coast is studded with barrier islands and highly dynamic inlets and estuaries that support more than 300,000 shorebirds annually. The unique curved coastline of the Georgia Bight results in large changes of water depth between low tide and high tide every day. This intertidal zone of extensive salt marshes, expansive sand and mud flats, and undisturbed areas of beach creates huge areas of potential food resources that are exposed by the receding tide.

Abby explained to us how our coastline is a major stopping off place for birds that migrate all the way from the artic to South America.  During periods of fall and spring migrations, Canadian and Alaskan nesting shorebirds such as the Short-billed Dowitcher, Red Knot, Semipalmated Plover, and Black-bellied Plover use our islands to rest and replenish themselves on the rich, abundant foods. The Georgia Bight is equally important for shorebirds that spend the winter here including the Great Lakes breeding population of the Piping Plover, and the American Oystercatcher. Breeding birds such as Wilson’s Plovers, and American Oystercatchers also rely on the barrier islands, shell rakes and offshore sand bars along the Georgia Bight.

Sadly, many of the species that rely on this important landscape are exhibiting population declines.  And that is why it’s so important for us to protect this habitat.

Did you know that yesterday, May 22, was the International Day for Biological Diversity, a day proclaimed by the United Nations to raise awareness about the threats to Earth’s rich biological communities. It is a time to reflect on the importance of stability in the web of life and the risks we face when a species is lost to extinction. I received an email about ten days ago  from a board member of the UU Ministry for the Earth asking UU ministers to consider honoring the biodiversity of our Web of Life on Sunday, May 23 (today).   I had already selected “Blue Boat Home” as our special music and theme for today – and thought – wow, that’s a remarkable coincidence – that I’m asked to focus on this earth and the web of life on the Sunday when I had planned to do so anyway.  Now some would say that it’s not just a coincidence.  Hmmmmm.  I’m open to that!

The email encouraging our acknowledgement of this day goes on to say:

For those of us who feel a deep spiritual kinship with the millions of species who share our Earthly home, the idea that extinction is a natural and inevitable part of evolution can be difficult to acknowledge. Though we know intellectually that life on Earth has endured a series of mass extinction events, including the Cretaceous extinction 66 million years ago that allowed mammals like us to evolve and flourish, the perishing of a species has a finality that can evoke the pain of grief. Reading about the extinction of the Passenger Pigeon in the early twentieth century whose flocks once darkened the sky or seeing the images of emaciated polar bears threatened by the disappearance of sea ice due to climate change can bring us to tears and fill our hearts with anguish. The biologist Edward O. Wilson suggests we human beings possess an innate “biophilia” – a love of life – that makes us feel a connection to the wondrous diversity of life on Earth, so it is only natural that we should feel such sorrow.

But the mass extinction event we are witnessing now was not caused by massive volcanic activity or the unfortunate collision with a meteorite. Human-caused climate change, habitat destruction, and simple indifference and wastefulness has decimated animal and plant populations and accelerated the rate of extinction far beyond natural levels. Familiar species, and species we never got to know, are disappearing forever far too soon, leaving us with a biologically and spiritually impoverished world.

And though I’m sometimes a little cynical about those ads on TV with the sad music showing those Polar Bears on those icebergs and such – I realize that the Polar Bear is just the poster child for the need to save all endangered species – because we are drawn to them and their beauty – and perhaps  they aren’t seen as dangerous to us because they eat fish.

What we don’t see with the sad music is the disappearance of many species that may hold the cures for diseases that kill us.  I’m going to share my screen to show you a page from the National Wildlife Federation which makes this a little clearer with some examples.

Previous mass extinctions on our planet were caused by Natural phenomena like the meteor that hit the earth.  This time it’s caused by us.  And this time, we are not powerless. We can do something about it if we have the will. Let us grieve as we must, but then let us take action to preserve and protect the biodiversity that remains. Billions of our fellow creatures are counting on us.

What can we do? Too much for one sermon to share – but here’s a nice summary of six possibilities offered by Yale Biodiversity website:

Regularly buying from small local farmers at stands or markets helps to keep dollars in the local economy and supports agricultural efforts to conserve biodiversity.

Bees are important to preserving biodiversity – and they are increasingly under attack from varroa mites. You can help save them by planting nectar-producing wildflowers in your backyard, or even building bee boxes for local bees to call home.

Research the flora, fruits and veggies native to your area, and plant a variety in your backyard or a hanging garden. To aid in this effort, support local nurseries that specialize in native species. Nurseries can be great sources of information about plant maintenance and care.

Biodiversity depends on the abundance of local fresh water. Taking five-minute showers and turning the water off while washing your hands, doing the dishes, or brushing your teeth are all easy ways to conserve water.

Plants growing in the parks and nature preserves near you often play an important role in preserving the local ecosystem. When you’re outdoors, protect local biodiversity by sticking to the walking path or hiking trail. Help your children and pets to do the same!

Check the products you buy and the companies you support to ensure that your buying habits are not contributing to destruction of habitat elsewhere. Look for labels such as FSC (Forest Stewardship Council) or Rainforest Alliance Certified.  Both organizations are committed not only to the conservation of the Earth’s resources, but also to advocating for the human rights of the native peoples who inhabit the land many products are sourced from.

So with our hopes we set the sails
And face the winds once more.
And with our hearts we chart
The waters never sailed before.

I sail in you. You sail in me.

Amen – and Blessed be to Our Blue Boat Home.

Posted by revjanepage at 7:46 PM No comments: