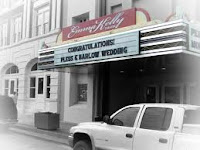 Every time I walk into the Emma Kelly Theater I'm flooded with memories. When I was a child here in Statesboro back in the 50's, we came to this theater often. It was then called the "Georgia Theater" and we came almost every time the movie changed. We always sat in the same place - near some steps by an emergency entrance on the left side - so my dad could put his feet on the steps. I also came often with my brother Johnny on Saturdays, where for 25 cents we could see a double feature and six cartoons! The theater would be packed -all kids -all joyful -all white. Well, there was the section in the balcony where the African American children could sit; but they entered by a side entrance before climbing those steps, so I rarely even thought about the separation. When civil rights laws became impossible for the management to ignore, they resolved to keep their white clientele happy while continuing to make money from the African Americans as well by a change in the price structure. The policy was that you could pay a higher price and sit downstairs - or a reduced price to sit in the old "colored section" of the balcony. And the un-said expectation was that nothing would change. For a long time, it did not.

Of course, as I have shared previously with many of you, over time I did change. And I became more and more frustrated with the lack of progress in our community toward inclusion. As an adult I began to gradually get involved in efforts to promote more racial justice in our community and became known by some as "a traitor to my heritage." I loved my community, but I did not love our lack of love for all.

And that is why I found myself with a broad smile that was stuck on my face at a recent visit to this beautifully renovated theater this summer. I was sharing an evening with my step-daughter Sarah at the local production of the musical "Hairspray." I know she must have wondered why I could not get that smile off my face. You see, the juxtaposition of my history with that building with my experiences that night were just too delightful for anything but a constant grin signifying my total joy.

As you may know, "Hairspray" is set in the 60's and has as a primary theme, the acceptance of others who may be different - including the transformation of a community from one that is segregated to one that is integrated. Of course, it is a highly fictitious, light-hearted production, and only hints at the real struggles of the 60's, yet those of us who were there understand the unstated significance behind the words to the songs and dialogue.

It was during the intermission that the overwhelming joy started welling up in my soul. I was thirsty - so went to the lobby to get a drink of water from the water fountain. And there - reminiscent of earlier days - were two fountains side by side. Except, of course, this time both were clean with cool water. One was lower for those in wheel chairs or who are of shorter stature and the other was higher.   As I drank that good cool Statesboro water from the lower fountain, I looked to my side where an African American man was drinking deeply from the other fountain there in the main lobby of that theater. Had we not been witnessing that play in that building, it would not have had the same meaning. But for me, at that time and place, I thought....   YES!

Then when I returned to my seat I looked around at all the joyful folks waiting for the actors to return to the stage. And I noticed in the row in front of me a man of European descent and a woman of African descent - very obviously a couple - totally relaxed in that environment. On my row sat a family that included a father of African descent, the mother of European descent and mixed race children. When I looked around me, I saw many of the folks with whom I grew up in Statesboro, having good conversations about the wonderful play they were seeing that night. And I thought..... YES.

The play began again and I witnessed folks taking part who I knew were openly gay in our community. And again, I thought.... YES!!!

YES, we still have struggles - but here we are!! We did make this journey, and though we have a ways to go, we have come far. It just took us about 50 years to do it, but we ARE making progress!

Later at a meeting of the Averitt Stars, I shared with them that I was committed to providing more support because the ARTS can provide wonderful opportunities for social transformation. Statesboro used to have a motto that I still remember hearing on the radio. "Statesboro - where nature smiles and progress has the right-of-way." Oh, may it be so!