Let it be a Dance! 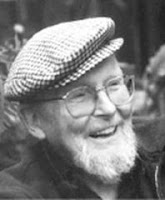 I have always loved to dance. Moving to music connects me with the Divine in ways that no other spiritual practice can. Perhaps that is why I also immediately fell in love with Ric Masten’s song, “Let it be a Dance” the first time I sang it at this UU fellowship many years ago. In this song, Ric uses dance as a metaphor for life. I used his song as an organizing mechanism for my final “integrative paper” in seminary – exploring the relationship between worship and religious education. Greg and I also chose the words, “Let it be a Dance” as the theme for our wedding; because we saw our lives together as a dance. And now, I’ve selected this song and its lyrics as a theme and framework for my sermons for the coming fall and spring semesters.

When I was working on my integrative paper in 2005, I wrote to Ric Masten to get his permission and input for doing so. Ric Masten was a Unitarian Universalist troubadour, in the true sense of the word. He was a wonderfully inspired poet and songwriter. I’m using the past tense because Ric died on May 9, 2008 with his family surrounding him and singing this song. Ric had journeyed with prostate cancer for a decade – giving him lots of inspiration for poetry and occasions to reach out to others. But his body could dance no more. The spirit of love and life that he gave to us dances on though – continuing to inspire us. Ric wrote back to me in 2005, of course, giving me permission to use his words in my paper and in other ways as well. He also shared information with me that would give me a better understanding of the song. One of the stories he shared was the history of how he came to write this song. I thought it would be helpful for us to have knowledge of this inspiration and background as we explore this song for meaning in our lives this year. So I’ve copied his words in the five paragraphs below and thank Ric for his open-ended permission!

“It was one of those horrendous tragedies that happen in the American high schools every 4 or 5 years. This particular incident occurred 33 years ago at Carmel High. A first year teacher, Sharon Elliot, offered a course in Modern Dance and had 14 young women and men performing like Broadway professionals. My two oldest daughters, Jerri and April, took the class and were a regular part of the troop. During Christmas vacation Sharon saw that a famous ensemble out of New York City was performing in San Jose, about 80 miles from Carmel. She called up all of her students and said that if they were willing to be crowded during the journey they could go up to San Jose together in her VW bus. Both of my daughters wanted to go in the worst way but had other holiday engagements scheduled.


“As the carload of dancers was rounding a corner on the way home, a drunk driver who had pulled over to the side of the road decided to pull back onto the highway without looking behind him. The VW crashed headlong into his car, killing the two front seat passengers – the teacher and Bonny Btussell, and a back seat passenger – Celia Neal, who was thrown forward. All the other girls and boys in the back seats were seriously injured.


“Barbara Brussell, my daughter Jerri’s best friend and also the older sister of the girl in the front seat, had her kneecap so badly damaged that the doctor doubted if she would ever walk without a cane, let alone dance again. My family and I visited Barbara in the hospital where I made a bet with her. Wagering that she would come dancing up our Big Sur dirt road exactly one year from that day. And what's more, I would write the music that she would be dancing to.


“The following week, while working in my garden the entire song arrived. I ran to the house and wrote the lyric down as fast as I could type. Better still the words came along with a melody. An added motivation to write “Let It Be a Dance” was that the Unitarian Universalists were having their General Assembly in Dallas, TX that year, and the keynote speaker was to be Sam Keen, who wrote the book TO A DANCING GOD. As is my style I wanted to have something relevant that would fit into the conference theme for my scheduled performance.


“Barbara Brussell, now a well known Cabaret singer in NYC, did come dancing up our country road exactly a year to the day after the accident, with me singing and playing “Let It Be a Dance.” Barbara was limping, it’s true --- but DANCING!”


I hope you will join us in services this year. We will begin by singing Ric’s words at our ingathering service on August 15 – and include the “Dance of Emerging Life” – with the children joining me as we dance; revolving and evolving together. Other services will use phrases from the song to explore other aspects of our lives. Come join us!

May I have this dance?
Posted by revjanepage at 3:07 PM 1 comment: