I’ve been considering metamorphosis this morning. No, not the Franz Kafka novella that we read in our literature classes.  I try NOT to think about that!  But real biological metamorphosis that many species go through.   More specifically I’ve been thinking of moths and butterflies and the wonderful process involved in their transformation from their larva state, commonly known as caterpillars.

I found these stages of the moth’s life cycle to provide a good lesson for us as our congregation begins our next stage of development. The quotes and pictures are from an article at this link:  https://www.pestwiki.com/moth-life-cycle/ 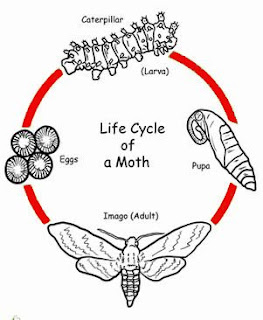 The very first stage of the life cycle of a moth is the embryonic stage. This is the stage where the embryo develops inside of the egg. I envision this as the part of our history where we were just beginning, meeting in houses or other temporary places, trying to find out who we were  and what we were going to be.

The second stage is the larva stage (commonly referred to as a caterpillar).  “When the caterpillar first hatches, before it molts and sheds, it is said to be in its first instar. It continues to go through this process as it grows.”  I envision this as what has been occurring in our congregation since we hatched out of temporary housing and became more visible and active in the community.

The third stage is the pupa stage.  “A caterpillar has the ability to spin a type of silk made out of proteins which it produces. A caterpillar spins this silk into a protective shell called the cocoon, inside of which the transformation process will occur. The purpose of the cocoon is to offer protection for the vulnerable larva while it transforms, plus it keeps everything contained.” Some think of the organism as resting during this period.  But it is not resting.  It is in a cocoon so that it can be protected as it works to transform.  I feel like this pandemic and our pulling into our shells for protection has been a time that our congregation has found new ways of being together and new ways to serve one another.  We were not growing bigger, but we were transforming.

Stage four is the adult moth or the imaginal stage!  An adult moth is technically called an “imago,” therefore making this stage of its life the imaginal stage. And here is something important to remember: “It takes quite a while for the adult moth to emerge from the cocoon, as at this time it is soft, weak, and quite fragile. Getting out of that cocoon is a difficult process. When the moth first emerges from the cocoon, it will have a severely bloated abdomen and shriveled wings, rendering it unable to fly for the first few hours of its adult life.”  Wow!  I think this is important for us to remember as we emerge from our pandemic life.  We will need to be patient with one another and know that not everyone will be ready to fly!  It will take some time and planning.  We also may be worried that we seem to be weaker than before the metamorphosis process.  But this is natural.  It takes some time for the transformation.  Indeed, we may even be smaller than that big caterpillar.  But, folks, if we do this right, we can fly!  May it be so!

Posted by revjanepage at 7:22 AM No comments:

The Teacher and Preacher in me Agree

In addition to being a Unitarian Universalist minister, I’m an educator, having retired from a long tenure at Georgia Southern as a Professor and former Department Chair for Curriculum, Foundations, and Reading.  In writing this letter, I’m drawing my background from both of those careers.  I am very concerned about the proclamations by many leaders regarding banning the teaching of “critical race theory” (CRT) as well as “Diversity, Equity, and Inclusion” (DEI) in our schools.  One high ranking state official weighed in before the Cherokee County ban with a letter to the state board of Education calling CRT a “dangerous ideology,” and encouraged them to consider banning any curriculum related to it.  This shows either a deep misunderstanding of Critical Race Theory, or a REAL attempt to keep students from using the highly valued “critical thinking skills” when thinking about “Race” or “Diversity, Equity, and Inclusion.”  Why would we want to discourage critical thinking about anything?

Here are some things I’d like your readers to consider when they hear about this subject.

1st:  CRT is not a curriculum.  It’s a theory.  It is complex and has evolved.  There is no simple clear definition.  It began about 40 years ago as a framework for academics to use when looking at race and racism.  I was introduced to it by my colleagues in education who had done research using this framework.  And, in fact, I realized that much of my work was connected to it as well, though I did not have the words or expertise to be able to articulate that before doing more extensive reading.  A relatively simple explanation was provided by Donna Lowry on a recent GPB podcast.  She states CRT supports an understanding that “race issues are embedded in all aspects of society, legal systems, policies.”  It also acknowledges “the legacy of slavery, the legacy of segregation on Black Americans and other people of color continue to permeate the social fabric of this nation.”

2nd:  If my fellow white boomers and others are honest with ourselves, there are a lot of things that were “whitewashed” for us as we were growing up in the Southeast.  Like Ty Seidule, author of Robert E. Lee and Me, we were taught a version of truth about the “war between the states” and slavery that highlighted the “lost cause” mythology.  And if we had any privileges at all, we were taught that it was solely due to hard work, that everyone had an equal opportunity for success.  This, my friends, was not so, and still is not so.  After speaking along with members of the NAACP as well as many progressive white folks about the need to move away from a very biased tracking procedure in the early 90’s, a former classmate said to me, “Jane, you were brought up right here with the rest of us and still live here.  What in the world happened to you?”  I responded, “I read.”  I wish I had also said, “I learned to think critically.”  In effect, critical race theory is simply thinking critically about racism.  If we want all our young people to be successful in the 21st century, we need for them to learn critical thinking skills and certainly, to apply those skills in thinking about issues of oppression.

3rd:  Utilizing critical race theory is the right and ethical answer to many of the problems we face today as we attempt to adapt to a changing world.  And this is where I wear my ministerial hat.  My calling as a minister is to be a voice in southeast Georgia sharing (with a deeply southern accent) the need for us to repent.  That’s right – repent.  Recognize that many of us have followed others into a world view where we do not recognize the structures that systematically oppress many folks.  We have been blinded by our own previous failures in education and by our own unwillingness to open our minds and hearts to a new way of thinking that is more inclusive and equitable for all people.  But perhaps, we can one day sing the words of that old hymn with new meaning, “I once was blind, but now I see.”  Yes, that amazing grace is available for us to all be better people, to think more critically, and love more deeply.  And then after we repent, we can move into the world and work for peace, liberty, and justice for all!  May it be so!

Thank you for this opportunity to share some of my thoughts on these issues with my fellow southerners.  I know that many may disagree with me.  I’m not asking for “a fight.”  I’m asking that we listen to one another.  Thanks for listening to me by reading this letter. I too, am listening and hoping we can build some bridges between our divisions.