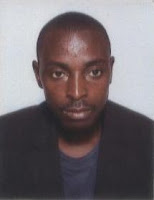 
What country has the fastest growth of Unitarian Universalists? Kenya! So how did that happen? Did we send over missionaries to “convert” them? I wouldn’t think so. That’s wouldn’t be very “UU” of us, would it? I’ve been “m-uu-sing” on these and other questions since I received an email from Abuga Ragira, Lay leader of Ruai Unitarian Universalist church in Kenya. It seems that Pastor Ragira had read my sermon about congregational covenants on the internet and found it interesting. He shared with me his role in his local UU church and asked that I write back so that we could share our experiences in “uuism.” I wrote the following email back to him:

"Thanks for writing to me Abuga.  I'm glad you liked reading my sermon.  If you go to our UUFS Web Page (see the link in blue below) you can find a page that links to my sermons and read more.  I am happy to have a contact with a UU in Kenya.  I am hoping to one day be able to travel to Kenya, but it may be a few years before I can do that.  Perhaps we can stay in touch and if I am able to come one day, we will meet!"

And that’s how my friendship and frequent correspondence with Abuga began. Since that time, I’ve researched more through UUA to find out about his church and others in Kenya. Pastor Ragira’s congregation is one of several congregations in the Northern Kisii district that unite under the Kenyan Unitarian Universalist Council (KUUC). A separate council operates in Southern Kisii with well over 30 congregations in membership. The two councils recently agreed to work together under the umbrella of the KUUC.

"Ten years ago, the continent counted only a handful of UU congregations—four in South Africa, where Unitarianism was introduced in 1857, and two in Nigeria, where a Unitarian church was founded in 1919. Recently, congregations have emerged in places such as Kampala, Uganda; Bujumbura, Burundi; and Brazzaville, Republic of the Congo. But the most spectacular growth has occurred in Kenya, where local leaders say sixty-eight congregations have sprouted in the Kisii province, a six-hour drive west of Nairobi. Several dozen more have emerged in Nairobi and central Kenya."
http://www.uuworld.org/life/articles/141815.shtml

Unitarian Universalism isn’t totally new to Africa. There were two other groups before the more recent growth. According to Rev. Brian Kiely, a Canadian Unitarian minister who has traveled and worked with congregations in Africa:

"Unitarianism has been in South Africa since 1867 when a young Dutch Reformed minister turned his back on his church and preached the message of a loving – not wrathful- God. Our South African congregations are also culturally Caucasian and European. The only other Unitarian group with historical roots is in Nigeria where the tradition dates from 1915. There, a black Anglican Bishop, a 'liberal and principled man' pulled away and began holding services in Yoruba, using native instruments and writing Yoruba hymns."

But Unitarian Universalism in Burundi, Uganda, Congo and Kenya are pretty much brand new. Many of these folks are finding us through the internet. Kenya is the exception. Kenya’s Unitarian Universalists are organized into four main communities, but all owe their discovery of Unitarianism to Rev. Patrick Magara. According to Kiely, “Patrick is our only ordained minister in Kenya, although his ordination cane from the Seventh Day Adventist tradition. He discovered Unitarianism in 2001 and soon convinced his congregation to follow him into his new faith.”

Actually, he convinced more than his own congregation. It seems that he was the head of an association of two dozen Adventist churches, and most of them followed him in the UU faith. He found out about UU from a friend he met in the grocery store while he was studying in the United States. He went back and researched it on the internet and decided that this was the faith for him. He was quoted in UUWorld as saying, “I was questioning things. I was surprised that even my own church leaders treated Africans like children. And I was finding some weaknesses in my Christian beliefs. The idea that God was in each one of us was appealing.”

And since that time more new churches are forming all over Kenya. My friend Abuga Ragira is a lay pastor at one of these. His church meets each week for worship services and they are very active in various community projects, especially their women’s group. They have raised funds for the orphanage that is run by UUs there and they are trying to help some of the women begin small enterprises to help them provide for their families. According to Kraft’s article, UU is especially popular with women, as noted by the following quote:

"We found that Unitarians defend women very much. We have a problem in Kenya and we are determined to change a system where a pregnant woman has to carry sticks on her head, push a wheelbarrow, or work in the field while the men sit around. Unitarianism teaches our husbands that we are equal. Those other churches tell us we must obey."

There are many children in Abuga Ragira’s church who enjoy singing and hearing about the UU principles. I asked Abuga to send me there first names and one Sunday in December, our children wrote notes or drew pictures for all of their children and we mailed these. The children in Kenya were delighted with their special notes with their names on them sent to them by the Unitarian Universalists children in the United States.

Meanwhile, my friend Abuga and I stay in touch, sending messages via email and now on Facebook too. Today I had this message from him on Facebook:

"It is a nice morning here and the wind is blowing very nice and the birds of new valley are flying from tree to tree tuning some sweet songs enjoying the good weather. Right now we are mourning to our people who were widespread devastated by the earthquake in Haiti. The world is in a state of guessing what is eating it but let us pray to God to protect us from fate."

Recently I asked our UUFS board to affirm our friendship with this congregation and they agreed. What does this mean for us? Although they have great needs, they have not asked us to send them money. Of course we could decide to help them with one of their projects in the future. But the main thing they want is connection with others who have found the joy of Unitarian Universalism. And we can respond “Amen” to that!
Posted by revjanepage at 7:49 AM