On August 18, 2007,  Greg and I were married here in this church.  Many of you were here and joined with us in that wonderful celebration of love.  Now after my first marriage of almost 30 years, I had said that I would never marry again.  Actually – I wasn’t very high on that institution.  And back in 2002 after Greg moved in with me, I shared a sermon with this congregation entitled, “Marry, marry,….quite contrary,” with lots of reasons for not getting married, including the fact that many of my gay and lesbian friends did not have that opportunity.  And in fact, I had told many of them that I would not consider marriage until they could marry also.

It’s a privilege that we, as a mixed gender couple had in Georgia.  My friend Joan Schneider had helped me rationalize this by saying that I had lots of privileges that other folks didn’t have that I took advantage of every day.  I was not giving all of them up – and instead was using those privileges in ways that hopefully were helpful to others.  So, with that nice rationalization and also the encouragement of my minister friend Nan White (who did not HAVE that same privilege with her partner) – we moved forward with our plans.  And I’m glad we did.  As our invitation stated, we had the desire to give our love its fullest expression – and for us, that was marriage.  And then, as a married woman and a Unitarian Universalist minister, I made an equally strong commitment to continue the work to make this privilege – this choice – one that all couples can make.

(Here I am marching for Equality in Washington, DC with the LOVE sign as my hat. And Greg marched with me.)

Now, of course, marriage is not the only thing we advocate for as LGBTQ people and allies.  But it’s part of “the Agenda!”   You know about “the agenda” of course.  If not, I’ll let Congressman Barney Frank give you a quick lesson.

By the way, Barney Frank is retiring after this term in office and will be getting married soon in his home state of Massachusetts.

Now some may ask – Why would anyone want to get married in the first place?  What is marriage for?  Well, although some on the conservative right would have us to believe that the institution has remained unchanged through the ages, it just isn’t so.  The purpose of marriage and its structures have changed with changes in society.

Most ancient societies needed a secure environment for the perpetuation of the species and a system of rules to handle the granting of property rights. The institution of marriage handled both of these needs.  But most would agree that ancient marriages were not for love.  Historian John Boswell makes this interesting comparison of pre-modern Europe love and marriage with today’s culture.

In premodern Europe marriage usually began as a property arrangement, was in the middle mostly about raising children, and ended about love.   Few couples in fact married "for love," but many grew to love each other in time as they jointly managed their household, reared their offspring, and shared life's experiences. Nearly all surviving epitaphs to spouses evince profound affection. By contrast, in most of the modern West, marriage begins about love, in its middle is still mostly about raising children (if there are children), and ends - often - about property, by which point love is absent or a distant memory.

Now at the same time that all of these religious and civil marriage ceremonies were taking place, we also have evidence of services designed to unite same-sex couples.  Here is Boswell’s book about that.

Through the ages, there have been lots of different forms and varieties of marriage – including polygamy– also now known as “big love.”

And there have been lots of laws and social mores about who could and could not marry.  Here are some maps that make interesting comparisons.  First – here’s the one showing in blue the states where same sex couples can marry. We can add Washington State thanks to events this week.  And if not for Governor Chris Christie’s veto, we could add New Jersey.   Maryland seems to be on the way as well.  But as you can see, we’ve got a long way to go.

Now here’s a map showing where you can marry your first cousin. 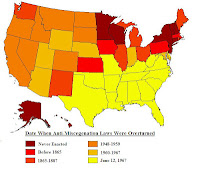 There also used to be state laws against marrying someone outside your own race.  Here’s a map showing when these laws were repealed.  Only the brown states NEVER had them.  There were 30 states that kept them on the books till the Civil Rights movement.  And these yellow states – didn’t take them off till the Supreme Court ruled in 1967 that they were unconstitutional in the case Loving vs. Virginia. That case is important to our discussion here because the same 14th Amendment rights being violated by these laws can now be called into question as Proposition 8 makes its way to the Supreme Court.

On June 12, 2007, the late Mildred Loving issued a rare public statement, which commented on same-sex marriage, prepared for delivery on the fortieth anniversary of the Loving v. Virginia decision of the US Supreme Court.  The concluding paragraphs of her statement included the following.

Surrounded as I am now by wonderful children and grandchildren, not a day goes by that I don't think of Richard and our love, our right to marry, and how much it meant to me to have that freedom to marry the person precious to me, even if others thought he was "the wrong kind of person" for me to marry.

I am still not a political person, but I am proud that Richard's and my name is on a court case that can help reinforce the love, the commitment, the fairness, and the family that so many people, black or white, old or young, gay or straight seek in life.  I support the freedom to marry for all.  That's what Loving, and loving are all about.

Now because of the concepts and demeaning legalities that existed in the “traditional” institution of marriage, many feminists have shied away from what they considered a trap.  Even nineteenth century feminists like Elizabeth Cady Stanton had simply argued for women to consider opting out of marriage – acknowledging that marriage equality would not be possible in their lifetimes.  And Stanton placed part of the blame on the shoulders of women who were unwilling to acknowledge change was possible.  Here’s a quote from Stanton in 1894:

Women are too proud to admit that they want what they think they cannot get.  They fear the ridicule of the men of their households, of the press, the disapproval of their clergymen who quote the Bible against larger liberties for their sex….
The women’s movement continued, though, to move….slowly it seemed….but move it did.  And the institution of marriage itself changed.  So much so, that it became acceptable to even feminist icon Gloria Steinem, who married in 2000, and to Jane Page too.

Now marriage is not viewed as a trap or cage – but rather as a safety net providing rights and protections for both parties.  Is what Greg and I have just a piece of paper certifying our marriage commitment?  No, it is more than that.  Ask any unmarried couple who has paid heaps of money to lawyers to write documents for just some of the same rights and protections.

I had said I would never marry for benefits – and I did not.  But there are many benefits -- some estimate as many as 1400 specific legal benefits that Greg and I  have access to that couples who cannot marry do not have.  In addition, private employers and institutions often give other economic privileges and other benefits (special rates or memberships for example) only to married couples.

Evan Wolfson is the founder of Freedom to Marry and perhaps the nation’s leading advocate for marriage equality and the author of Why Marriage Matters.  Wolfson provides a long summary of benefits in his book – too long for this little homily.  But I will share the broad categories he uses.  The big one has to do with death and taxes. Others benefits are related to debts, divorce, family leave, health, housing, immigration, inheritance, insurance, parenting, portability of marriage to other states,   privilege (meaning legal privilege), property, and retirement.  And though they CAN address some of these with legal documents; most of these critical, concrete legal incidents of marriage cannot be arranged by shelling out money for an attorney or writing up private agreements – even with lots of forethought.

Of course some argue that you could get those same things with something less than marriage -- Perhaps legalizing civil unions or domestic partnerships like some states have.  And that’s a step.  But it’s the back of the bus, and we should not settle for that.

Just ask Janice Langbehn, who had a wonderful domestic partnership in Washington State with her partner of 18 years, Lisa Pond.  In addition to caring for 22 foster children, they had adopted three children and Lisa was a stay at home mom. 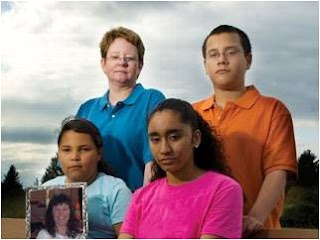 Lisa died after a stroke while they were on a family vacation in Florida – and she died alone in that hospital while Janice and her children grieved in an small waiting room – not allowed in, because they were not really considered family.  Janice and Lisa had all the paperwork --- But it comes down to more than legalities.

When LGBTQ people are not allowed to claim MARRIAGE – and all that folks know go with that, then this can happen.  Separate but equal – is never equal!

Now while I and others here will fight for the right for marriage equality – at the same time, we need to be supportive of all kinds of families.  Single folks as well as married folks -- regardless of sexual or affectional orientation, gender identity, or whether or not they have children.  We all just want equal choices – including the ability for two folks who love each other to get married.

Why is this such a difficult battle?  Are people just that prejudiced?  Well, we are products of our society and sometimes it’s hard to get over some of the things we were taught.  Sadly, much of the negative teachings we’ve had came from religious teachings. The Bible has been used through the ages to deny people rights.  Many of us have felt that lash of the Bible Belt – for lots of different reasons -- and sadly it continues to be used.

I am very proud of the stands that Unitarian Universalists have taken and that we have a long history -- since 1970 -- of calling for the full inclusion of Lesbian, Gay, Bisexual, Transgender and Questioning people in church and society.  Our Standing on the Side of Love Video that we played before the sermon shared some of this – so I won’t recount all that we’ve done.  But we have much work still to do.

Now it is going to TAKE a Supreme Court ruling for us to have marriage equality in Georgia.  But there are things we can do in the meantime – even here in Georgia.
•      Continue support of extending privileges to domestic partners.
•      Come out – in our relationships, with our identity, as an ally and advocate!
•      Work for and vote for progressive candidates supportive of marriage equality
•      Give money and time to those working for this goal.
•      Express views via blogs, social media, editorials, letters, wearing ribbons, etc.

I have a vision. I envision a world where there will be no need for words like homophobia or even labels categorizing one's sexual orientation. People will love who they love because they love them. And they'll love each other for as long as they possibly can. And since my higher power is the Power of Love; for me - God is Love; God will look at that world and say,
"It is really good!"