Building on the Foundation of our Liberal Faith: Five Smooth Stones

READING
Hear these words attributed in Matthew 7: 24-27 to that great teacher Jesus of Nazarath: 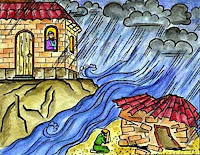 Meditation
May we rest in the foundation of our souls as we breathe in and out and prepare for hearing this message.

Sermon:
You know – Jesus was right of course. You can’t build on sand and expect your building to hold.  But sometimes there’s just not enough rock around and you have to make your own.  And that’s what folks learned to do.  When we want to build now --- we pour a concrete foundation.   We take broken stones, and gravel and sand and cement and water – and make new rocks to build upon.

Now we are fortunate that we don’t have to do this for our new church home.  The foundation is already there – strong and sturdy.  And we are going to take that strong foundation and use that as the base for our new home.

I’m connected with this idea of foundations and concrete.  You might say I’m cemented to this idea through my own genes. Here’s a picture of two of my relatives – now deceased.

It was probably taken in the 40’s or 50’s at a family reunion.  The man on the left is my grandfather – Theodore Roosevelt Rogers – and the man he is sitting by is his uncle John Rogers.  Both of them were CONCRETE men!  I mean literally – that’s what they did for a living.  They didn’t have a big concrete company – they did smaller jobs with those little concrete mixers – and they did all kinds of masonry work; including elaborate plastering of walls.  I don’t know WHO taught my Great, Great Uncle John to do this work --- but he taught his nephew, my granddaddy Theodore.  That’s how it was back then – no “Ogeechee Tech.”  So granddaddy was lucky to have learned a skill that could feed his family – just barely during the depression; but they survived.

My granddaddy was a concrete man in other ways in my life too. He was a small man – sort of a David among Goliaths when it came to people doing construction – but he was strong and skillful.  I remember seeing and admiring his biceps.  And he was a quiet man and a loving man, devoted to his family.  Although he went to his adult men’s Sunday school class on Sunday – I don’t remember a lot of “God talk” from my granddaddy.  He was kind of a skeptic.  My mama told me that he didn’t believe in an afterlife – saying, “When you’re dead – you’re dead.”  I guess that also meant that “When you are ALIVE – you should be ALIVE” – and he tried his best to enjoy life – especially fishing.  He taught my son Fred to skin a catfish when Fred was just a boy – and Fred can still outskin most folks with his Great Granddaddy’s Rogers techniques.  SO – my granddad is really a part of me --- a foundation in my soul.  His quiet love for me and others is more than a firm example of how I should live my life.  It’s something I can build upon.

Do you have some concrete – foundational folks who are a part of you?  Maybe relatives or teachers or spiritual leaders.  You got some in your head.  Say Thank You to them!

James Luther Adams  was born in 1901 and died in 1994.  Adams was the most influential theologian among American Unitarian Universalists in the 20th century.  I never met him, but he had taught some of my professors at Meadville Lombard – and they said his ghost was walking those halls.

Adams was a great storyteller and liked to use stories, parables, and metaphors in his teaching.  He chose the story of the Five Smooth Stones to illustrate the foundations of liberalism.  As you remember in our Children’s message today – King Saul initially had David put on all his heavy armor.  But all of this weighed David down --- and he threw it off.  Likewise, many of us were weighed down with the heavy religious armor that we were handed down --- those doctrines and creeds which bound us tight and didn’t let us move and breathe freely.  And like David – many of us have thrown those to the side.  But what do we have in liberal religion to face those spiritual giants that we do have to face.  David picked up five smooth stones – and said – “This is what I need.”  Similarly, Adams shares five smooth stones that serve as the foundation for our liberal faith.  Adams’ writing is rather dense – so his students and others often translate these words into something they believe is more understandable --- and indeed, before the sermon is over – we’ll reduce them to one word each for you to remember.  But for now – I want you to see them just the way he wrote them.

1.  "Religious liberalism depends on the principle that 'revelation' is continuous."

Our religious tradition is a living tradition because we are always learning new truths.  We Unitarian Universalists LOVE to learn – and we know that we don’t know it all and that’s okay with us.  Now where is this “revelation” coming to us from if it’s continuous?  Do we just pray and it comes?  Well, that may be true for some – but most of us rely on other sources – like authorities and the scientific method.  We are always seeking the truth.  And that’s not the kind of truth that Stephen Colbert is talking about when he shares about the word truthiness.  Do you know what truthiness is?  You can look it up.

The United Church of Christ had an ad campaign that spoke to this same concept a while back from their more theistic perspective and the words they used were “God is still speaking.”  And you know--- I think I even heard something akin to that from the Pope this week.  This liberal idea of continuous revelation is spreading.

Here’s the 2nd smooth stone.
2. "All relations between persons ought ideally to rest on mutual, free consent and not on coercion."

We freely choose to enter into relationship with one another.
Adams was big on what he termed Voluntary Associations.  These were the institutions he felt could make a difference – where folks came together freely for some bigger purpose – like we are doing here today.  Adams said that "Church is a place where you get to practice what it means to be human." And we do it together, in relationship.  We do it together – in love!

Now some folks think that because we don’t believe in coercing folks to join us, that we should not evangelize.  Well, to evangelize does not mean to coerce – it means sharing your good news – and that we SHOULD do.  This is not your Aunt May’s secret recipe that only the family gets to see.  Of course, Unitarian Universalism is not for everyone – but there are many folks who could find a home with us and need this liberal religious home – but don’t know about us.

I was sharing with one of you earlier this week that this is especially important in a conservative area – where it SEEMS that everyone follows Fox News and joins the Tea Party.  But it’s not so.  There are liberal folks in the Statesboro area who want to make a difference in this community.  And joining our congregation is the best way I know to do that.

Here’s the third smooth stone:
3. "Religious liberalism affirms the moral obligation to direct one's effort toward the establishment of a just and loving community. It is this which makes the role of the prophet central and indispensable in liberalism."

Now I don’t go around telling everybody this – because the word has different connotations for many folks.  But I strive to be a prophet in this community.  That does not mean that I’m setting up a tent to tell fortunes or your future.  But I DO believe that I have a moral obligation to call out the truth – like prophets of old; especially when I see injustice and oppression.  That’s the main reason I decided to go to seminary and become a minister; to better prepare myself to prophesy!  But Adams says – and I agree – that ALL of you should be prophets.  We ALL -- as liberal religious folks – have the moral obligation to establish a just and loving community.  Now for some of you, that means speaking out, or writing letters to the editor  – for others it means teaching our children, and for others it means GIVING your time, talents, and money to this congregation which is attempting to be a vehicle for positive change.

Our GIFTS and our willingness to GIVE are part of our foundation. (Hint – to turn in your pledge cards.)

What’s the fourth stone?
Adams says:
4. "We deny the immaculate conception of virtue and affirm the necessity of social incarnation."

Our children say we are Unitarian Universalists:  people of open minds, loving hearts, AND helping hands.  It’s that helping hands part that this stone represents.  That was evident this past week as many of you assisted in preparing food and serving folks at Rebecca’s Café.  Over a hundred folks got a good meal and good fellowship because of your efforts.  And that may have made a huge difference for some folks.  And there are other ways we work in the world as well --- individually and as a congregation.

Some folks say that “We are God’s hands.”  Well regardless or your own theology – I think you’ll have to agree that we have to do the work.  And work is a good thing!

And finally – that Fifth Stone.  Adams say:
5. "Liberalism holds that the resources (divine and human) that are available for the achievement of meaningful change justify an attitude of ultimate optimism."

He says – we got good reason to HOPE.

Even in places like Statesboro – change is a ‘comin.  In fact – we have made progress folks.  It’s easier for me to see the progress, because I’m looking over a LONG time frame – since the 50’s.  But we’re getting there.  Now as we work toward that progress, we have to do it as a dance, which means sometimes we are moving backward and sometimes forward; but stay on the dance floor.

I worry so about our political system and the lack of progress in Congress, but there is even hope there; and even hope in the Middle East.  You notice that Adams’ optimism isn’t a Pollyanna kind of optimism though. He says that the resources – divine and human -- are available for meaningful change. So the possibilities are there; and we have to be the agents of that change.

In his essay entitled, “The Optimism of Uncertainty,” Howard Zinn writes:  “There is a tendency to think that what we see in the present moment will continue. We forget how often we have been astonished by the sudden crumbling of institutions, by extraordinary changes in people’s thoughts, by unexpected eruptions of rebellion against tyrannies, by the quick collapse of systems of power that seemed invincible.”

It can happen.  I remember when I first began working for marriage equality – and I thought – this probably won’t happen in my lifetime, but I’m going to work with others for it and perhaps make it easier for those who follow to get there.  But I’m still here – and it’s happening.  Maybe not in Georgia – but it is happening; Same Gender couples are getting legally married every day in America and our nation is recognizing those marriages.

And folks we have the foundation we need to do it.

Here are those five stones in five verbs for you to remember!  I have these verbs written on the stones on the altar.  They are: