An Old, Old, Story of a Man Called Job 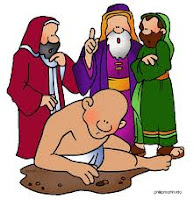 As retold by Jane Page

Today I’m going to share a very old, old, old story with you about a man called Job. You can find this old story in a book called The Bible – and in a book called The Qu'ran. But it’s told a little differently in those two books – and actually – I’m going to tell it a little differently today. But it’s basically the same story.

So ----- Once upon a time, long, long ago – in the place called heaven, the Big Guy who some called God – but I’m going to call Big G – was sitting up on his throne. And Big G was enjoying listening to this praise concert that some of his heavenly guys and gals were singing -- -and in comes another heavenly guy who was always pestering Big G and challenging him and teasing him. Now some called this fellow the Adversary – and others called him Satan – and some called him Devil – but I’m just going to call him Little D.

So Little D said, “Hi Big G! I just got back from walking all around the earth. Had a good time down there watching all those creatures – especially the ones called people – they are sure a mess.”

And Big G said – “Oh – but you must have also seen my man Job. Now that Job – he’s one fine fellow. He works hard and follows all the rules and Job is always saying good things about me. He says – 'Blessed B to Big G.' He’s a fine fellow, that Job.”

But little D says – “Well no wonder Job says good stuff about you. Look what all you have given him. He’s a very rich man. Why he has seven thousand sheep, three thousand camels, five hundred yoke of oxen, five hundred donkeys, and a big family with seven sons and three daughters. He only says all those good things about you because you protect him and his stuff. I’ll make you a bet that if you let me take away everything that belongs to him, he won’t be so good anymore – and will say bad things about you Big G.”

Big G said, “Little D – you got a bet. You have my permission to take away everything he has – but I’ll bet my man Job will have great patience and will still be a very good man and still say ‘Blessed Be to Big G.’”

So Little D teleports back down to the earth and begins to do his dirty work. And the next thing you know, one of Job’s servants comes up to him and said: “Oh my good master Job – I have bad news. Some thieves have come and stolen your camels and donkeys and oxen.”

And before he could finish talking – another servant came and said, “Oh my good master Job – I have bad news. A fire came and burned up all your sheep.”

And another servant came and said – “Oh my good master Job – I have bad news. A band of bad guys from another country came and stole all your camels.”

Then a fourth servant came and said – “Oh my good master Job – I have very bad news. Your sons and daughters were all eating together at the oldest son’s house and a great storm came with great winds and caused the roof to cave in on them – so now you have no more children.”

Well Little D was standing behind a tree watching all of this happen and waiting for Job to curse and say bad things about Big G.

So little D teleported back up to heaven. And Big G said, “See I told you so. My man Job is a very good man who still does not say bad things about me.”

And Little D said – "But he still has his good health. Let me take away that and make him sick and you will see that he will turn against you.”

And Little D teleports himself back to earth and causes Job to get very sick and big sores to come all over his body – and they itched and burned and Job was miserable. And Job’s wife came and tried to get him to say bad things about Big G – but he still said, “Blessed Be to Big G.” And his friends came and told him that he must have been a very bad man for these bad things to have happened to him – and they were bullying him to make him confess to bad things he had not done – but he did not – for he had not done these bad things. Job did complain though and ask why these bad things were happening to him.

Then Big G spoke to Job in a whirlwind (which was his favorite way to communicate) -- and Job heard him say – “JOB – who are you to complain about these bad things happening to you? Where were you when I made the world? You don’t control everything that happens to you. There will be bad things and good things – that’s the way the world is. But you have been patient and have not said bad things about me. So I will reward you.”

So Job gets well from his sores and gets back many, many, more sheep, and ox, and camels, and donkeys than he ever had before. And he also has seven more sons and three more daughters. Then Job lives to be a very old man. And he has bad times and good times like we all do. .. but he continued to say: “Blessed Be to Big G.”

And that’s the old, old story of a man called Job.
Posted by revjanepage at 12:40 PM