A Welcome Relief for Welcome 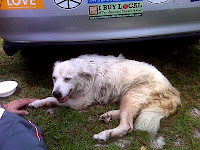 Sometime in 1996, before the birth of my first grandson JD, his dad brought a puppy home to their mobile home (which was where the “Holey of Holeys” now stands near the labyrinth). It seems that one of Fred’s friends was raising bulldogs, and the Mama bulldog obviously had somehow had an encounter with some other pop than the one selected for breeding. One of the puppies had too many characteristics that didn’t match – especially that long white hair. So this friend told Fred he would just give him this mutt if he wanted it. And Fred brought this beautiful puppy home. The puppy’s favorite place to rest was on the stoop right in front of their door. So Michelle named her Welcome – because she was like the “Welcome mat” greeting you when you came in. Of course that later became quite a joke, because Welcome was anything but welcoming to the stranger.

Later when Fred and his family moved, Welcome became my son John’s dog – and they developed an especially strong bond when he nursed her back to health after she was hit by a car and had to undergo a difficult surgery. Welcome had a limp after that, but she could still run like the wind.

Welcome had been with us for 14 years. And like many of your own special pets, she was definitely a part of the family. A month ago, Greg came in after his morning bike ride and said, “Jane, I think we’ve got a problem.” Poor Welcome was lying in her urine and could not move. And she was not wagging her tail when I talked to her and petted her. My mother used to say that she would know when it was time to say goodbye to Brownie, their old dog. She said, “He’s still wagging his tail – so it’s not time yet.” Of course, eventually that time came for Brownie – and now it had come for Welcome. I made the appointment with the vet, and called my son John in Atlanta to let him know. Well, he called back after getting the message and said he was on the way to Statesboro. So we delayed the appointment till later in the day, then decided to let the doctor try during the night to see if there could be improvement. Actually we let Welcome spend two nights in intensive care. We picked her up in the day and just spent time with her, even doing her favorite thing, which was riding around with the windows down. But she didn’t even lift her head to the window. Finally, John was ready to let go. And we did. John and I shared our love with Welcome as the doctor administered the sacred, wondrous medication that would take her so gently and quickly away. And I sang one of our favorite UU songs: “Go now in peace, go now in peace. May the spirit of love surround you, everywhere, everywhere, you may go.” And she was gone.

We came home and buried her body in our little pet cemetery in the woods. Our little service included this modification of a poem by Thomas Nault:


Now these laughing eyes are closed in that long sleep
Which is the soundest and the last of all:
Shroud not my limbs with funeral pall
Nor mock my rest with vainest prayers, nor weep,
But take the husk of me to where the birds soar, 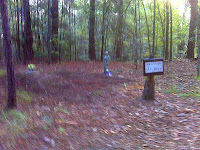 In dewy woods where critters play and love,
And there, when the sun peers through branches from above,
Bury the part of me which is no more.
And on those days you wander by that wooded trail again
Think of me as then shall be, a part
Of the sacred earth, and if you see the red
Of setting sun, or feel the clean soft rain
Or hear the wind blow in the trees,
Then let your heart beat fast for me,
And I shall live within it.

As I think back on this time, I am so very grateful that we were able to allow Welcome to have this welcome relief and not suffer anymore. Oh, wouldn’t it be wonderful if we could be as humane with our human family members. May it one day be so!
Posted by revjanepage at 6:59 AM