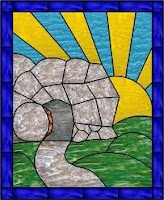 Do you have happy childhood Easter memories? Perhaps getting new church clothes! Or having visits from the Easter Bunny? Did you enjoy hunting eggs?

When I was a child attending elementary school in Statesboro, GA, we had an Easter egg hunt at the home of one of my classmates. His name was Alan Minkovitz and his family was Jewish. Nevertheless, we went to his home for the Easter egg hunt. They had beautiful azaleas and dogwoods blooming in their yard. And that’s one of the memories that has stuck with me to this day. So the secular side of Easter brings happy memories for me. But what about the religious side?

As Easter approached each year, my Southern Baptist Sunday School teachers and preachers told me of the sacrifice that Jesus had made for MY sins. He died for ME. And the music, especially tugged at my heart.
(Sing) "Jesus paid it all.
All to him I owe.
Sin had left a crimson stain,
He washed it white as snow."

Yes, Jesus shed his blood for me. And that blood washed away my sins.
(Sing) "Oh! Precious is the flow
That makes me white as snow
No other fount I know
Nothing but the blood of Jesus."

When I was nine years old I made my profession of faith at a church revival while listening to such songs. How could I not give my heart to this man who had so much love in him that he had taken on the burden of my sins? But the good news was that Jesus and his love did not remain in the grave. And the music re-sounded that message.
(Sing) "He arose, he arose, hallelujah Christ arose."

However, the time came when my head and my heart were at odds with this idea of Resurrection. My head not only won, it converted my heart to a new way that made more sense. So NOW – what do I do with the resurrection story?

For many years I tried to just not think about it. I tried to think, instead, about the life of Jesus and his teachings; because I could believe those and they made sense to me. But I could not use what I could not believe in my life. So I began to view the Easter holiday in a more traditionally pagan manner – as a time to celebrate rebirth and renewal – a springtime celebration that I could share with my children and other family members.

And that’s where many Unitarian Universalists probably find themselves –celebrating the renewal aspects of Easter and ignoring the resurrection. In the late 90’s, however, the resurrection story became very important to me again.

In January of 1998, a couple of years before I joined the UU’s, I shared a reflection with my Sunday school class. I read this reflection also to those of you who were here back in 2005.
So if you were here then, you may have heard this story before. But many of you were not here; and I think it’s important to have an understanding of where I’m coming from with much of my use of religious language. The reflection that I wrote back in 1998 is entitled: Death and Resurrection, and I’d like to read it to you now.

“But we also die small deaths everyday; and at the end of the day we experience the death of ourselves for that day knowing that the sun will come up tomorrow and we will resurrect. The death and resurrection metaphor has become especially important to me in recent days.

“I've enjoyed a wonderful marriage and I'm so grateful for that. Oh, we've had lots of ups and downs, as all marriages do, but for the most part, it has been exciting, vibrant, and glorious. But a cancer invaded my marriage. And like many others we've known, I really tried to defeat it. During the Christmas holidays, the pain became unbearable. And since that time, I've had to come to the reality that my marriage is over and that, of course, has been very difficult. I've also had to realize that the ‘married me’ – the ‘me’ that was part of ‘Fred-n-Jane’ – will also be no more; and that's about the only me I know.

“We were married in 1968. I was 17 and had just graduated from high school. Fred was 21 and just flunking out of college. But, it seemed right at the time! So I don't really know who an adult Jane is without the Fred. And that's where the death and resurrection metaphor becomes so meaningful to me.

“I feel like I'm in a tomb, and its dark. But friends, I can hear the stone moving. I don't know how long it will take, but it’s moving. And I can see a little crack of light. So I feel good about it.... Because I know that, for me, Easter is coming!”
(Personal manuscript; January 1998)

Now, it’s interesting that a Bible Story that I had tried to IGNORE for years because I could not believe it literally - came back to comfort me at this very difficult time.

Why was resurrection the important metaphor for me rather than perhaps renewal or metamorphosis? Because for there to be resurrection, – something must die. For me, it was what had been a central part of my identity. Sometimes we have to let our identity DIE before the stone can roll away and we can become a new person. That’s what happened to me and Easter DID come!

So – little by little – even as I began to “come out” of the Christian closet, I also began to try to recover the stories, symbolism, songs and traditions of my Christian heritage that can help me as I go forward in life.

As part of my seminary training, I took a course in the Ancient Church. And as I read about the early church, it became very clear to me that the reason Christianity took off and grew so rapidly had little to do with the historical Jesus. In fact, sometimes I wonder if some Christians have really examined the teachings of Jesus. It’s not the historical Jesus that Christians worship. It’s the resurrected Jesus! Because that Jesus has been presented to them as a living spirit – God incarnate living in their hearts.

I do not know what happened to Jesus’ body after his death. I do not believe that his dead body regained breath and came back to life after two or three days. However, I do not doubt that his followers and disciples saw glimpses of Jesus, heard his voice, felt his presence. People still do today. And they see Mary. Just as many people also report that they see or hear or feel the presence of their loved ones who have passed on.

Have you ever heard a voice or seen or felt something that later you realized wasn’t a physical reality? Have you ever had false memories? Our brains are very complex and we are not sure how these kinds of things happen. But they do. And as some of his followers spread the word of the glimpses they had of Jesus, others saw and felt him too. As far as they were concerned, he was alive!!

Why was that so important? I believe it is important because we need to feel that whatever it is that we consider as divine or sacred or ultimate in our lives is a living spirit - not necessarily as a separate ontological being – but as something that can give us the hope and power and energy to make a difference in this world.

Last week, I had some confirmation that maybe I had some of it in me. I was over at our local food outreach center, picking up some food for our UU team to use for out turn Feeding Statesboro. There was a man working there who looked familiar to me – and he helped me locate the food that Joe Bill Brannon had stuck back for us. As we were loading it into a box, he said –
“Aren’t you that woman that helped me?”

And I remembered – and said, “Yes, I am.” I remembered him then as someone helped in an emergency situation with funds from my discretionary account that you make possible with your donations.

He said he didn’t recognize me at first cause I had a baseball cap on my head – and went on to tell me how well he was doing now. Then he said something that about blew me away. He said, “Some church folks talk about Jesus coming again – but I tell them I see Jesus in the flesh every day. Now he doesn’t come knockin’ on your door with a beard and long robes. But he’s there if you really look for him. In fact, sometimes he’s a short, blond-headed woman with a baseball cap on her head.”

I smiled and said, “Yes, and sometimes he looks just like you.”

Now this gentleman and I have differing theologies – but we are looking for the same thing. And while he may use Bible narratives to help him, as a religious naturalist, I more often find my inspiration in nature. In his song, “Let it be a dance” – Ric Masten said, “Morning star comes out at night.” That morning star is actually the planet Venus – named for the Goddess of Love. And if you look to the eastern horizon before the sun comes up, you can often see Venus shining there; a bright little light – like that crack of light shining in the tomb – a sign that the day will soon break! Yes, a sign that even when things are very dark for you – the sun will come up.

While I love the metaphors of nature, I can still appreciate and honor the metaphors and stories of various religions – including Christianity. We Unitarian Universalists are good at honoring other religions. But from my experiences I think we do a better job of it with other World Religions than we do with Christianity, though there are Christians among us. We are getting better with this; but we still have work to do too.

If we do this work, and reach out to others and work with them on social justice goals that we have in common (like we are now doing with Voces Unidas and Feeding Statesboro), and help them in honoring their own traditions while inviting them to celebrate in ours – how wonderful that would be!

AMEN
Posted by revjanepage at 3:31 AM