This week five years ago was an unusual one for me. Preparations were underway for our congregation to ordain me as a Unitarian Universalist minister and install me as the first called minister. I was busily preparing the orders of service for adults and special ones for the children, and others planned for a grand reception at the Averitt Center after the ceremony.

That same week we moved dad to the hospice facility just down the street from our church. Dad had been under hospice care at home for his Alzheimer’s and other serious problems. However, he needed to be moved for some procedures to make him more comfortable. Once we moved him there, we realized that he probably would not be coming back home. The end was very, very near.

What to do? Calling off the ordination would be very difficult. Major plans had been made and airline tickets were purchased for special speakers, etc. Changing these plans would be disruptive to many people. And who could tell when my dad would go?

On September 24, 2006; the Unitarian Universalist Fellowship of Statesboro ordained and installed me in a wonderful ceremony. My dad had wanted to be there. He had told me earlier – in a rare moment when he knew what was going on in our lives; that we may have to wheel him in on a stretcher – but that he would be there. Indeed, he was close by – just down the street, with my nephew taking a turn at his bedside so that other family members could be with me. And as family and friends joined this congregation in a laying on of hands ceremony, I felt his strong hands there as well.

Early the next morning (September 25th), my brother called and shared that my dad had just breathed his last breath. My seminary friend Lee Page was with me when I got the call and accompanied me and my mom to the hospice facility.

My son John’s birthday was on September 26. That evening we had Dad’s visitation at the funeral home with so many folks from the community who had known my dad through the years coming through to share a moment with us. Then we had the funeral and buried him on September 27th.

That week I had traveled back and forth from our building to the hospice building with so many mixed emotions. And the combination of my son’s birthday with my dad’s visitation service was also surreal. Yet, it is at times like these that we often enter a spiritual realm that somehow gives us a holy strength and energy that is incomprehensible. My mom and I were reminiscing about this today and I shared with her my thoughts about this special realm. She replied, “That’s what some of us call God.” 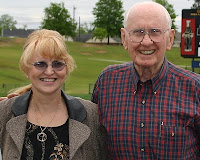