These Three…Lost in the Debris of 9-11: America’s Ten Year Search for Faith, Hope, and Love! 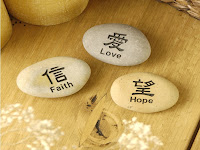 Like some of you, I may not remember what I had for supper last night – but I remember exactly what I was doing on this morning 10 years ago. I was in riding in Nate Hirsch’s car. Nate was then the owner of two radio stations in town – and “The Voice of the Georgia Southern Eagles.” We had been paired together to collect money for Georgia Southern’s “A Day for Southern” – and we were out doing just that.

Nate got a call from the people at his radio station, telling him that he needed to know about a plane crashing into the World Trade Center. He shared that with me and I envisioned a small plane – somehow – off course – perhaps with the pilot having a heart attack or something – and then having this terrible accident crashing into this large building. That of course was what it must have been. And Nate and I discussed that possible scenario. Then he got another call – saying that indications were that it was perhaps not an accident.

Our next stop was at the Nursery School where my grandson JD (now 14) was attending pre-kindergarten. We decided to continue our efforts to collect the money for GSU – still not understanding what was happening. When we entered, however, we saw much of the staff hovered in a room with a television – and we saw and heard this being replayed.
(News video of plane crash into second building) This was no accident.

I went to JD’s room and asked his teacher if I could come in and hug him. That is all I wanted to do right then. I’m sure JD wondered why his Nana Jane was paying this special visit. He did give me a big hug and smile – then pulled away and went back to his playing. The juxtaposition of those happy children playing in one room with the videos on the screen in the other room was surreal.

Now all of you (unless you are very young) have a story like that to tell – forever burned into your memories. America has not lost those memories – but we did lose other things that day. Some of us, of course, lost family members and friends. Even I had a friend that died in one of those towers that day. But we seemed to have lost more than that. To some degree – not entirely – but to some degree – we have struggled since that time to find and hold on to some of our most important treasures – even – to some degree – faith, hope, and love. 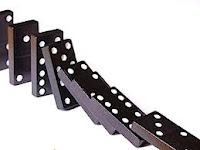 I’m going to pause now – and let those of you here lift up some of the difficult crises, tragedies, and concerns that we’ve witnessed in the last 10 years. What do these falling dominoes represent to you?

One of the most difficult and devastating of these tragedies is the cost in lives, money, and soul – of our violent response.Americans have always wanted to be winners – and that’s fine for a ballgame, and perhaps even for the Olympics, or maybe this board game. 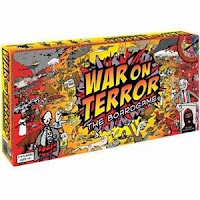 But, how do you WIN a “War on Terror”? Unlike this board game or ball games, there are no clear rules, no uniformed opposition, no referees. Yet, once we begin – like the TV game show and reality talent show judge Howie Mandel cheers, we’re “In it to Win it.”

And now the politicians cut the very services that provide some semblance of security for those in desperate need. And we search for our lost faith, our lost hope, our lost love.

After I decided on the title of this sermon and my selected text, I decided to study this passage we read earlier from 1st Corinthians a little more – looking at some of the exegesis of so-called biblical authorities about the meaning of it; (not that I myself view either the apostle Paul as an authority or the Bible as an authority; although I do include those writings as a source of inspiration.) But I thought – if I’m going to use this passage, let me see what others who do view it in a more authoritative manner say about this. Of course – they don’t all agree. But many do say that Paul viewed both faith and hope as spiritual concepts that endure – but are not as powerful as love.

Faith – according to other writings of Paul – is based on knowledge. And it’s the step we take after acquiring what knowledge we can. Now many put their faith in some supernatural beings or ideas. But we also put our faith in other kinds of things.

Now HOPE is a more emotional quality, that feeling we get when we have some optimism that something good can happen!

Then there is LOVE. LOVE is what we DO for others – sometimes translated in this passage from Corinthians – as charity. And what we DO supersedes our faith and our hope.

I kind of like that explanation. It reminds me of our children’s affirmation – when they say –“We are Unitarian Universalists – people of open minds, loving hearts, and helping hands.” We have all three aspects, but it’s really the helping hands that make the biggest difference.

The title of this sermon implies that “these three” have diminished in America since September 11, 2001; and that we continue in our search for them. That’s just a metaphor, of course; but I’d like to explore it a little more with you.

Has America lost faith? Some folks probably hope that we have. In fact, some folks blame faith and religion for acts like those that occurred that day. Sam Harris makes that argument in his book entitled: The End of Faith. And, if you have read this compelling book, you’ll probably find yourself nodding your head in agreement with much of it. And I hear John Lennon singing, “Imagine no religion…” – and think, yeah! 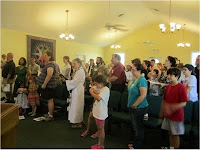 But then, I love connection, I love worship services, I love and need to be with others who are striving to become better themselves and to make the world a better place. And I have faith that we can join together in some kind of loving connection and make that happen.

But many HAVE given up on any kind of formal identified faith. “According to a comprehensive national survey released in 2009, those identifying with no religious tradition, or as atheists or agnostics, account for 15 percent of the population, up from about 8 percent in 1990. "No religion" Americans are the only religious demographic that's growing in every single state.”
(http://www.usnews.com/news/religion/articles/2009/03/13/leaving-religion-behind-a-portrait-of-nonreligious-america)

I wonder – if those folks know about Unitarian Universalism. I wonder if they know that there IS a tradition where they can find a home – a home that welcomes atheists and agnostics as well as others who follow varied spiritual paths. I’m not so worried about folks not going to church or synagogue though – And I’m not so worried about folks losing faith in God. But I am concerned that many have lost faith in what God represents: goodness and love in the world.

And – what about HOPE? In the Presidential campaign of 2008, we heard a lot about HOPE. I’m sure you remember this poster.

And I think that many of us, regardless of our politics, were somewhat optimistic that we could rescue HOPE from the debris – pull it out, hold it up. But events since then have been discouraging and HOPE seems to be stuck.

And then there is LOVE – which includes tolerance and compassion.
As the hip hop group Black Eyed Peas so effectively shared in their 2003 recording…. Where is the love?

"What's wrong with the world, mama
People livin' like they ain't got no mamas
I think the whole world addicted to the drama
Only attracted to things that'll bring you trauma
Overseas, yeah, we try to stop terrorism
But we still got terrorists here livin'
In the USA, the big CIA fightin'
The Bloods and The Crips and the KKK
But if you only have love for your own race
Then you only leave space to discriminate
And to discriminate only generates hate
And when you hate then you're bound to get irate, yeah 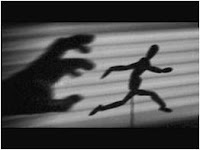 So what is the debris – and how do we clean it up. To me – the debris is FEAR.
Psychologist Brad Schmidt agrees. In a January 1, 2002 Psychology Today article, he wrote: “On September 11, terrorists did more than destroy buildings; they scarred the American psyche.” The article goes on to explain some of the generalized anxiety that psychologists were seeing throughout America – even in rural areas, after 911.
And perhaps that should be expected.

But it seems that fear has taken hold of us in many ways since that time. And it’s been used by powerful people – selfish people to control us. (and those “People” include some corporations – which, of course as we’ve been told by the courts – ARE people). And it’s been used to cover the faith, hope, and love we hope to regain.

If we are to regain that faith, hope, and love; we have to clean the debris. Remove those unfounded fears; use our brains to help us figure out what we really need to fear and what is bogus hype. Yes, we needed to tighten security after 911 and be on guard. And yes, after hearing of the recent “credible threat” –I’d perhaps be a little more on guard today if I lived in New York City or Washington, DC. But at what cost is this fear?

I saw an interesting statistic recently that compared the number of Americans killed last year by terrorists with the numbers killed by lightning strikes and dog bites. Here is that chart. 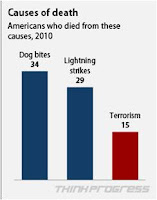 Now worldwide – there WERE 13,186 people who died last year from events that could be labeled as connected to terrorism. But then the World Health Organization estimate is that more than 16,000 children in the world die every DAY due to hunger alone. And the UN Estimate is 18,000 a day. So our priorities and our fears are a little messed up.

We have become fearFUL because we devour too much fear food. I’m reminded of the little nursery rhyme about Miss T by Walter de la Mare.


I’m reminded of that poem as I’m trying to change my own diet and eat food that is healthier for me and our planet. But I’m also reminded of it when I think about what I feed to my brain each day. And if I feed it a constant diet of fear –perhaps watching shows like Nancy Grace – or even the regular news casts – then I’m going to become fearful. I’m not saying we need to stick our heads in a hole in the ground and not know what’s happening in the world – but you know what I’m talking about, folks.

So here are some things I think we can do to clean up the debris of fear that keeps us from being able to fully possess those treasures of faith, hope, and love.
1. Educate ourselves to the facts. Don’t base our actions on hype. Are more children really being abducted or do we just see more on television?
2. Turn off the TV and other media that feed us fear.
3. Feed our brains with more positive possibilities, words, and images. Go to an art show, a good concert, a good walk in nature.
4. Get involved with doing good. Volunteer with something like Feeding Statesboro or Voces Unidas. Plant something good to eat or beautiful to see. Work for positive change.
5. Come here more often. Sing with us. Eat with us. Play with us.
We may not be able to change the nation or the world all at once,but we can start with ourselves and this congregation.

Let’s clean-up the debris and find that “faith, hope, and love” once again.