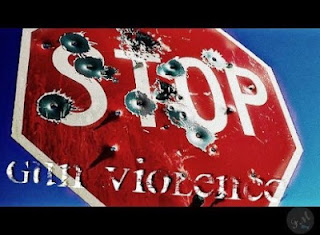 This weekend is one of two weekends in March identified by the interfaith group “Heeding God’s Promise” as a weekend to promote Gun Violence Prevention.  Other organizations including the Brady Campaign have been encouraging faith groups to get involved for some time.  But this big push for something this month probably is in hope that the timing is right for the government to finally do something – pass something – vote on something,  -- if enough voices are heard.
So a while back when I saw this request, I checked the box and agreed to dedicate this service to gun violence prevention.  It’s not the kind of sermon I especially enjoy doing.  I like uplifting sermons, funny sermons, sermons that make our hearts glad!  Yet – I am determined that we as Unitarian Universalists must stand up not only to religious fundamentalism – but today to religious gundamentalism.

Gundamentalism is a term coined by Rev. Rachel Smith, founder of the God not Guns Initiative.  It’s an offshoot of fundamentalism. Its adherents believe that nothing is as important as the right to own and carry a gun. Or many guns.  Their interpretation (and now the court’s interpretation) of the 2nd Amendment to the constitution appears to be more important than any commandment that Moses toted down that mountain or any passage from Christian scriptures. Rev. Smith says that their mantra, “’Guns don’t kill people, people kill people,’ is a magnificent half-truth that attempts to absolve gundamentalism of responsibility for the American epidemic of gun violence.  This mantra is chanted over and over until it drowns out the Bilblical mandates of thou shalt not kill; love your neighbor as yourself; forgive seventy times seven; do good to those who hate you.”

Gundamentalism emphasizes FEAR of the other.  And their Lord of protection is the powerful NRA – (“praise be unto it”).  They really believe that the answer to our gun violence is more gun violence.  I thought Rev. Smith had a good response to the call to allow guns on campuses after the Virginia Tech shootings.    She said:  “Sometimes I wonder if the proponents of guns on campus have ever been on a children’s playground.  Just picture a group of children playing.  If one child picks up a stick and begins hitting the others, what would you do?  Most parents would take the offending child aside, take the stick, and if the child can play without harming others, let the child return to the group.  One thing we certainly wouldn’t do is give all the other children sticks (bigger, better sticks perhaps?) with which to defend themselves.  If we wouldn’t arm our children with sticks when they are small, why would we arm them with guns when they are older?” Yet the NRA and various state legislatures keep moving in the opposite direction.

Then on December 14, we had the Newtown shootings at Sandy Hook School.  Although we’d had many mass shootings before – at schools, public gatherings, malls, theaters, and even houses of worship, this one seemed to capture the hearts and attention of folks even more.  Perhaps it was because of the age of most of the victims – cute, precious little first graders.  While thousands of urban teens and young adults are victims of gun violence each year, that doesn’t get the headlines or the hearts as easily.  Even some very conservative folks were saying, “Enough is enough.”  But the powerful religion of gundamentalism led by the NRA will not give up.  This may take a massive and continuous outcry to make a difference.

So here I am today --- crying out with others that – Enough is Enough!  You’ve heard the statistics before – so I won’t show a lot of slides for each of these, but I do want to give a reminder of some of the BLOODY STATISTICS.

Each year nearly 30,000 Americans are killed by guns.  In the last 40 years, more than one million Americans have died as a result of gun violence.

Firearms are the second leading cause of death (after motor vehicle accidents) for young people ages 19 and under in the U.S.

Eight American children and teens age 19 and under are killed by guns every day.

Here’s a comparison statistic that should shock you.    “The number of children and teens killed by guns since 1979 is two and a half times greater than the number of U.S. military personnel killed in action in the Vietnam (47,434) or Korean (33,739) Wars, and over 22 times greater than American military personnel killed in the wars in Afghanistan (1,712) and in Iraq (3,518).”  Yet, “The United States of America has spent  $1.5 trillion on the Iraq and Afghanistan wars so far, purportedly to protect our children and citizens from enemies without, while ignoring the reality that the greatest threats to child safety and wellbeing come from enemies within.” (Marion Wright Edelman Huffington Post blog).

ALSO -- There are far more suicides than there are homicides. And, guns kept in the home for self-protection are 43 times more likely to kill a family member, friend or acquaintance than to kill an intruder, according to a study published in the New England Journal of Medicine. Guns on the street or in the house make us less safe.

And finally, if dollars mean more than lives to some folks ---- Gun violence costs the U.S. at least $1 billion annually.

But those are numbers.  And that may not motivate us to dial numbers on our phones and send out numbers of emails.  So I sent out an email to our listserv and asked if some of you would share your own stories of how you or your family and close friends were affected by gun violence.  Here are a few of those.

One of you reported the brutal murders of two cousins – 30 years apart.  In both of the murders, the killers had no connection with the people they killed.  The effects on the family have been lasting and traumatic.

Another member lost his grandfather to gun violence and almost lost his father in a separate unrelated instance much later.  His father recovered but had lasting effects for the rest of his life.

Several of you were affected by gun suicides of relatives and close friends.  I’m doing some quoting and some summary paraphrasing to share this story that one of you wrote to  me about.  Here is the story

When my nephew – my sister’s son, was eight; his father, a Methodist minister, abandoned the family – just left, after a Sunday sermon – leaving his siblings, 6, 4, and two and his mother.  And the father never initiated or responded to any contact with the family – or sent any child support.  Not surprisingly, my nephew had zero self-esteem and failed in many activities in his young life.  In his late 20’s he somehow managed to locate his father and gathered the courage to call him.  The father’s response was, “Let’s leave things as they are.”  Shortly afterward, my nephew lost his job and ended his life in an abandoned parking lot with a pistol that he had brought from his home.  That has been 15 years ago.  In a bizarre coda, last year the headlines in a small paper in Maine reported that a man called 911 to report that he had shot his wife and intended to take his own life.  He did.  He was my nephew’s father. Neither my nephew nor his Dad was a hunter. Neither one was protecting himself from an intruder. Whether either would have killed using something other than a gun is impossible to prove or know.  But they had guns in their home, and this is what they used.

Some of you admitted that you were concerned about having a gun nearby when you or other family members became depressed or when you were very angry with another.

I have been fortunate not to have a gun death in my family --- well not since my great grandmother’s husband, Judge Meadows, was shot and killed in Coffee County – but that was before my time.  I was always worried about possibilities from stories I heard though.  Like the time my granddaddy was cleaning his gun and it went off and the bullet went through the wall and into the mattress where my grandmother was sleeping.  She never let him forget that!

And I remember having to yell out when I entered my parents’ house when my dad was in his 60’s and 70’s that it was ME – Jane – in fear that my dad might think I was an intruder and pick up one of his many loaded guns.

I was extremely concerned when my son was caught up with the whole drug culture in Statesboro about 15 years ago and carried guns for protection.  I interviewed him last Monday night about this ---- and what he shared with me is enough for a sermon in itself and much of the terrors of that time related to gun possibilities are really just too difficult for me to share today.

And then the first Memorial Service that I ever planned was for this man – my colleague and good friend, Bryan Deever – who was the victim of a brutal gun shot to the head – living on life support for a few days before dying.  His wife, a student in our doctoral program, shot him before committing suicide.  She had bought the gun a few days before – for protection (according to the gun shop owner).
I don’t like guns.  Thankfully I’m married to a man who feels the same way.  We won’t even let the children play with a water pistol at our home.  If it were up to me, we’d outlaw them ALL, even the hunting rifles.  But I know that is not going to happen.

So I can at least try to support the things that have a chance, like the outlawing and buy backs of AR 15s and other weapons of mass destruction.  This worked in Australia!

And the least we can do is oppose these ridiculous laws to increase the places folks can carry guns – like to CHURCH.  When that deranged guy came into that UU church in Knoxville, he killed two people before being taken down by those brave churchgoers.  But if folks in that church had guns and had taken them out and tried to shoot him – how many others would have been shot accidentally – collateral damage as they say.

This past Thursday the Georgia House passed HB 512 by an overwhelming majority - 117 yes votes to 56 no that would allow guns in church and more.  Considered the most sweeping pro-gun legislation at state level this year, HB 512 would:

Yeah – alcohol and guns make a great cocktail, don’t they!

So enough is enough.

Hopefully you were given a handout when you walked in that has some phone numbers and email addresses inside it that will help you contact your state and national lawmakers about this.  Take this out and wrap it around your phone so you can use these when you leave this place.  Seriously.  Because folks – we are better than this.

Now, listen to these folks who have a firsthand understanding of this.

We are Better than This Video

Yes, we ARE better than this!

Will you make a commitment to Stand up to Gundamentalism with me and others.  If so, I invite you to stand today and say --- “Enough is enough.”

Amen!
Posted by revjanepage at 7:36 AM